Find this article at:
go.ncsu.edu/readext?751829
— Written By Adam Lawing and last updated by Jill Cofer 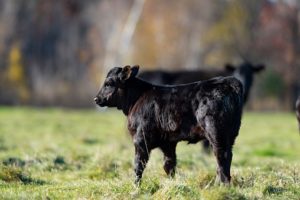 Dystocia, or calving issues can be a detrimental issue for cattle producers. It is estimated that 11% of heifers and 4% of cows need some assistance during calving season. Like many other management practices, it is easier to learn and prepare than it is to deal with the situation as it arises.

Looking at the definition of what dystocia is, is any delayed or difficult parturition and is the highest cause of death in calves less than 24 hours old. The hardest part about dystocia is that there isn’t just one factor that you can pinpoint the issue to. Factors can range from size, gender, presentation of the calf, body condition and the ability the cow is to give birth. The most common issue though is with first time calvers and younger cows that are inexperienced and still growing caused by improper heifer development, therefore they have a smaller pelvic area, making it tighter and harder to push the calf out.

Understanding the 3 stages of labor is critical. Cervical dilation, fetal expulsion (calving) and placenta expulsion is important. Some cows naturally take longer to get dilated before they can start calving. Knowing the signs and keeping a watch on cows during this process can help determine when or if assistance is needed. Typically, heifers are allowed 2 to 3 hours in labor before assistance is needed where cows are given 3 or more. Once labor has started, be patient. Going in and assisting to early before the cervix had dilated completely can cause more harm to the cow than waiting a little longer. On the other hand, if it is observed that the calf is positioned wrong, helping early can prevent losing that calf. In this case it is important to know the correct way a calf should be positioned in the uterus. Making sure that you have a head and 2 front feet is critical before give assistance to avoid harming the calf or cow. If you notice that there is an issue, it is important to have the vet on speed dial just in case.

Dystocia is more than just birthing difficulties. It also takes a toll on the cow and calf after the calving process. Calves are more likely to have symptoms of weakness, acidosis increasing the chance of morbidity and mortality further down the road. There has been research found that assistance during calving had more positive effects on weight gain and weaning weights than calves not assisted. When looking at how it affects the cow, they may have trouble breeding back due to a longer postpartum interval. There could also be damages to her reproductive tract or uterine prolapses, which can cause more issues down the road.

So what can you do to reduce the chances of dystocia? Genetics and management practices are the two best was to help. Utilizing EPD’s (expected progeny differences) can be a big help. There is a calving ease section when looking at their EDP’s. Calving ease direct EDP measures the percent of unassisted births from that bull. For this you would look for a bull with a higher number. Also looking at birth weights from the bull can help as well. Just remember not to go to extreme. Too high a calving ease number and too low of a birth weight is not always a good thing. This can lead to smaller calves which in return could be lesser value when sold by weight.

Measuring replacement heifer’s pelvic area with a pelvimeter can show you the measurement of a females pelvic area and give an idea of which females could give issues. Visually looking at the width between their hook and pin bones can be another tool to use when selecting replacement heifers or figuring out who you are going to cull. Generally speaking, the wider the hooks and pins are, the wider the pelvic bone is. If you notice that you have females that are narrower from behind than other females in your herd, you may want to consider culling those our (especially if those have had calving issues in the past).

Body condition score is something that is needed to be paid attention to all year round. During calving season, over condition cows or providing an excess of energy and protein in their diet can have issues with fat accumulation in the pelvis. Too much protein during gestation can increase the birthweight of the unborn calf. Fat accumulation and larger birthweight calves can makie it more difficult for the calf to pass through the birth canal. If females are too skinny, there may be issues with the lack of energy resources for her and the calf. Generally, heifers are the main concerns when looking at higher birthweight calves, but it can also be an issue with older cows as well. Females that were not selected and developed correctly tend to have issues that follow them throughout their lives. The biggest issue is with heifers that are bred to young. Heifers should be bred after they reach 65% of their mature body weight and calve when they reach round 85% of their mature body weight. Heifers that are bred and calve to young and small can result in their growth being stunted.

Losing calves is never a good thing for any producer and sometimes you can lose a cow during the process as well. The least that you can do is keep a check on your herd. Pay attention to the bull and the cows around breeding time so you can get an idea of when they may calve. Having a defined breeding season can also help by knowing when you need to keep a check on them more often. If you are having issues with dystocia, think about your management practices you are doing and see if there could be anything you can do different to be more profitable.