Face to face interaction is limited. Contact us by email or phone to help us prevent the spread of the Coronavirus.

Find this article at:
go.ncsu.edu/readext?703489
— Written By Jeannie Leonard (2 months ago) and last updated by Jill Cofer 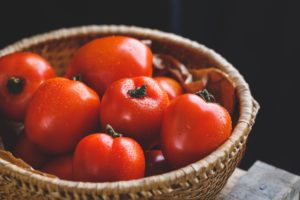 Nothing says summer quite like juicy, vine-ripened tomatoes still warm from the sun. Native to South America, tomatoes are a member of the nightshade family along with potatoes and eggplant, and were first thought to be poisonous by Europeans. It wasn’t until the twentieth century that tomatoes became a staple in the U.S., where they are now the third most popular vegetable. Although botanically a fruit, tomatoes have been classified by the U.S. government as a vegetable for trade purposes. Tomatoes are also an excellent source of potassium, are low in sodium and provided a good source of vitamins A and C.

When purchasing tomatoes be sure to select plump, heavy tomatoes with a rich color and pleasant aroma. They should also be free of blemishes and soft spots. When gently squeezed, they should yield slightly and feel somewhat firm. Soft tomatoes are usually watery or overripe. If purchasing tomatoes off-season, select fresh plum and cherry tomatoes as they have slightly more flavor than large globe tomatoes. Unwashed ripe tomatoes can be stored at room temperature for up to 3 days. Never refrigerate tomatoes before cutting as the cold temperature makes them lose flavor and become mealy in texture. Unripe tomatoes can be ripened by placing them in a paper bag. Do not place them in the sun to ripen. Refrigerate cut tomatoes in plastic wrap for 2 days, though flavor and texture will be diminished.

Before preparing tomatoes, you should wash them under cold water just before using. For sandwiches and salads, remove the stems and cores with a paring knife. Slice, dice or cut into wedges with a serrated knife. To core a tomato, place it on its side. Insert the tip of a serrated paring knife at an angle into the stem end. Rotate the tomato at the same time you cut with a sawing motion. Continue until the core is separated and can be easily removed. To seed a tomato, cut it in half crosswise. Hold the tomato half over a bowl, cut side down, and gently squeeze to remove the seeds. Use a small spoon to remove any remaining seeds, if necessary. To hollow out a tomato for stuffing, cut in half or cut a slice off the top. Scoop out the seeds and pulp with a spoon. Invert the tomato shell and place on paper towels to drain for at least 15 minutes before stuffing.

Some people will can tomatoes so they can enjoy their flavor into the winter season. You must remember that while tomatoes are botanically classified as a fruit, you will find recipes for juices, sauces, pickles, relishes and even preserves. The amount of natural acid in tomatoes varies depending on the variety, growing conditions, maturity, and handling. To ensure adequate amounts of acid are present when canning recipes using tomatoes, bottled lemon juice (not fresh) or vinegar labeled 5 percent acidity is added to acidify the recipe. By maintaining the correct pH level, tomatoes can be processed safely in a boiling-water canner.

Tomatoes can be served in a number of different ways. Try some of the following examples:

6 cups seeded, chopped chili peppers (Use a mixture of mild and peppers)

Pepper and salt to taste

Puree the tomatoes in a blender. Pour into a large saucepan. Add the chicken broth and simmer for 1 hour. Add the milk and herbs and simmer for 20 minutes. Season to taste.

In a large nonstick skillet, melt margarine over medium heat. Add onions and cook, stirring until softened. Add zucchini and cook for 2 minutes, Add tomatoes and cook for 3 to 5 minutes or until zucchini are crisp tender. Season with pepper to taste.